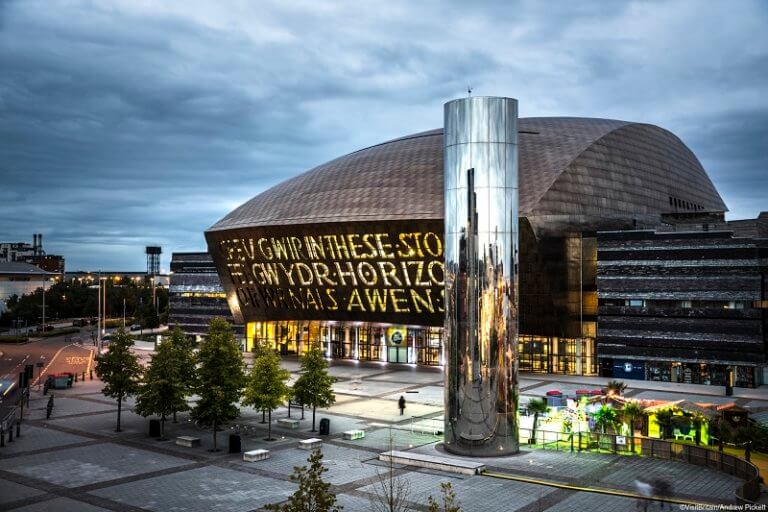 A tour of South Wales takes you back as far as the Roman occupation to the history of the Industrial Revolution passing stunning coastlines and breathtaking mountain scenery along the way. This part of Wales was heavily influenced by coal mining in the 19th and early 20th century but has enjoyed a regeneration in recent years. We include a variety of visits to show the natural wonders of the region as well as the historical ones.

The story of Victorian industrial growth is a fascinating one and brought to life by a visit to the National Mining Museum at Big Pit where you can actually experience life underground with the miners. We can also head underground to marvel at the cave system at the National Showcaves Centre before learning a bit more about the history of Wales at St Fagans near Cardiff. The natural beauty of the Gower Peninsula is unsurpassed and a drive through the Brecon Beacons shows you the wild openness of this part of Wales.

Day 1 –  On our arrival into Wales we stop at the ancient Roman site of Caerleon which was a Roman camp with amphitheatre. It’s still possible to see the outline of the barracks and to walk amongst the stones at the amphitheatre.
We continue on towardsSwansea and the beautiful Gower Peninsula which has some of the most stunning landscapes and pristine, sandy beaches in Wales.
Dinner and overnight in Swansea.

Day 2 –  Today we drive up towards the hills and valleys taking the Heads of the Valley road. The National Showcaves Centre is well worth a visit with the chance to see  These hills were the heart of the industrial success of South Wales during Victorian times as they fed the greed of the British Empire for coal. These hills were dotted with coal mines and ironworks and the fuel was transported down the valleys to Cardiff for export to other parts of the country and around the world. Today we can visit Big Pit, the National Coal Museum and hear the stories of the thousands of men who worked the mines and we don our hard hats for a thrilling visit to the shafts 90m underground.

Day 3 –  Cardiff is an ancient settlement beside the river Taff and the castle dates all the way back to the Normans. But it was only in Victorian times that the city grew thanks to the need for coal to power the engines that drove the industrial revolution. Lord Bute then had a lot of influence on the development of the docks and the castle with a new suite of Neo-gothic rooms.
We have some time this afternoon to enjoy a walking tour of the city with a visit to the Cardiff Bay area which has been redeveloped to become a vibrant waterfront that is also home to the Welsh Assembly and the Milennium Centre.
Travelling towards Cardiff we stop to enjoy a walk around St Fagans which is an outdoor museum that has recreated many of Wales’ most iconic buildings. From the red cottage to the school room, the church, the local store to the row of miners’ cottages, all these buildings will help bring the history of Wales to life.
Dinner and overnight in Cardiff.

Day 4 –  Leaving Cardiff we drive up to the hills again, this time for a pleasant drive through the wild Brecon Beacons. We stop at the little town of Monmouth for lunch before driving through the beautiful Wye Valley on our way back to England. But before we cross the border we stop to admire picturesque Tintern Abbey, once a thriving Cistercian Priory that fell victim to Henry VIII’s reformation in the 16th century. Two hundreds years later the first tourists started to visit remote areas and they considered ruins to be romantic. Tintern Abbey subsequently became also became popular in literature and painting.